This is the room where The Children and Autism Foundation’s working programmes for the autonomy of adults withautism are carried forward.
It is an industrial archaeological site, which was once the site of the famous Savio Workshop.
The building, which has been restructured bearing in mind the peculiarity of the site, has a professional mosaic laboratory, a packaging laboratory, an information technology laboratory, a showroom which is open to the public, a gym with a shower and changing room, a free-time room and coffee-break room. The rooms are spread over approximately 350 sq. metres.
At the Art Workshop, people with autism work together with therapy workers and mosaic craftsmen/women and create handmade mosaic art, and also large-scale artwork and versions of pictorial works of art in mosaic form. 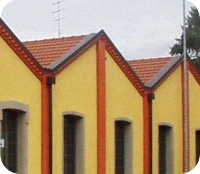 The projects created at the Art Workshop are on sale and consist of:

Profits from the sales of products contribute to supporting the Centre and at the same time represents a source of feedback, in terms of gratification and self-esteem, for the people with autism who made them.
For information and to request a catalogue of products: Tel. 0434551463, centro@officinadellarte.org

The Foundation has made and also continues to make, large-scale mosaic artworks.
Among the main works created up to now are two mosaics each of 9 sq. metres dedicated to Pier Paolo Pasolini and installed in the Middle School of the same name which commissioned them, and the "Mosaic of Peace" installed in Saint Valentine’s Park in Pordenone and also created by the Workshop based on a graphic design by Francesco Tullio Altan who collaborated with the initiative free-of-charge.

The artworks made by the Art Workshop were exhibited for the first time in 2005 at the headquarters of the ex-Convent of San Francesco with a collective exhibition entitled "Mosaicamente" created, on this occasion, with the collaboration of the Mosaic School of Friuli.
The experience was taken on board and subsequently repeated in 2008 with “Mosaicamente2”, dedicated to Paul Klee, and has since become a fixed event.
In 2009, it was the turn of “Mosaicamente3 – Homage to Andy Warhol” exhibited in Pordenone and then transferred to Belluno at Palazzo Crepadona’s Cube.

The Savio Family acquired the factory in via Molinari in 1912, when the chair factory, founded in 1981, ceased production. During the First World War and specifically after the Battle of Caporetto, the factory was confiscated by the Austrians and despite their having transformed it into a stable for mules, it was still in good condition at the end of the conflict. At this point, Marcello Savio, the forefather of the Savio Mechanical Workshop, transferred his repair activities for boilers, small-scale hydraulic turbines, grape presses, printing machines, etc. there. In this initial phase, textile machines were still not being repaired, let alone produced, despite being serviced and repaired in the factories in the surrounding areas.
In 1919, when Marcello Savio transferred his activities to Via Molinari, he had very little to take with him: the wars and consequent raids had emptied his previous warehouses and so he needed to start again from scratch, or almost.
From ‘19 to ’24, the Savio Workshops underwent significant development and this continued until ’29, when the American economic crisis had unfortunate repercussions even in Pordenone, starting with the cotton industry, so much so that in ’31 the Savio Workshops, which had begun to work in this sector, went from 15 to 2 employees (an all time minimum).
All the historical events that followed (the transformation of Fascism into a regime, the sanctions against Italy by the League of Nations and the consequent autarky, the Second World War, etc.) had a relevant impact on the progress of the Savio Workshops and even dramatic family events were intermingled: the death of one of Marcello’s children in ’40 and his own passing in ‘46, when all entrepreneurial activity passed into the hands of Luciano Savio, Marcello’s youngest son who found himself alone at the helm of the company and having to face the post-war years.
Under Luciano’s guide, however, the company grew strongly and became a leader in Italy, and not only there, for the design and production of textile machines. Even Pordenone grew together with the companies it hosted, above all Savio and Zanussi who contributed to the development of the city and its transformation.
In 1954, the Savio company, which had 216 employees at this point, transferred its Workshops from the headquarters in Via Molinari, which were narrow and insufficiently large, to those in via Udine, where the company is still based.
More detailed historical information on the Savio family history and the role it has had in the industrial progress of the city of Pordenone, can be found in the publications: “Savio. Men of Industry" edited by the Gruppo Anziani del Lavoro – Marcello Savio – for GEAP Fiume Veneto PN typography editions.

The start up of the Art Workshop: the partnership with the UMANA MENTE Foundation

The creation of the Art Workshop, inaugurated on the 30th of October 2004, was possible thanks to the contribution of various organisations, primarily, the UMANA MENTE Foundation.
The UMANA MENTE Foundation, part of the Allianz Group, was founded in 2001 from an initiative by the then, Ras Group, with the aim of intervening throughout Italy in sustaining and financing care organisations and agencies in the not-for-profit sector which were working in the field of juvenile unease and congenital intellectual disabilities.
UMANA MENTE supplies agencies with concrete help in planning and developing new projects. Indeed, its mission comes from a deep understanding of the profound needs of people who suffer from unease. The aim is to provide the widest and most accurate responses and interventions through the work of not-for-profit agencies which UMANA MENTE creates close collaborative relationships with and to whom it supplies concrete help in the planning and development of new services.
The contribution given by UMANA MENTE to the Art Workshop has not only been of a financial nature: the Allianz group foundation’s model means that the agency which intends to request funding has to present a detailed project and use instruments to monitor the efficiency of what they have done and evaluate their results. The Agency’s planning capacity is therefore put to the test right from the start by UMANA MENTE which, on the other hand, supplies a model for funding requests which in reality is in itself an efficient planning and analysis tool and which represents a growth and improvement opportunity for the Agency itself.
The projects which gain approval by UMANA MENTE thus, result from the competencies of both parties, both "fund-receiver" and "funder", and take with them the added values of this integration. The funding Agency becomes a real partner with whom it is possible to have an equal partnership.
All the intervention work supported by the UMANA MENTE Foundation aims to create centres of excellence. To this end, it is no accident that, very soon after its opening, the Art Workshop managed to obtain the Quality Certificate which the Children and Autism Foundation had already gained for its other Services.
The planning, which was implemented together with UMANA MENTE, the design of the start up phase, the definition of specific result indicators in quantitative and qualitative terms, as well as the experience gained in the field of autism, are all elements that have contributed to creating a new service that, right from the start, responded to precise standards of quality.
The positive experience which was gained with the start up of the Art Workshop has led to the partnership between UMANA MENTE and the Children and Autism Foundation being renewed for the "Live the City" Project. Indeed, the UMANA MENTE team, after having conducted an in-depth evaluation of the new Project, recognised it as worthy of funding, thus renewing its collaborative relationship with Children and Autism from March 2009 to March 2011.

COME BACK TO THE SUMMARY